I began pursuing Burlesque in 2010.  I was attracted to the glamour, but really fell in love with concept and character pieces.  I try to give all of my acts an extra push of something unexpected along with humor and playfulness.

Here’s a basic catalog of all my Burlesque acts available for booking. Contact me here for performance rates.

The Widow: A Femme Fatale in a classic gown/ corset/ panel skirt. This black widow cries, laughs, and strips to Metallica’s For Whom the Bell Tolls while attending the funeral of her latest husband.

Grapevine: A juicy balloon-popping routine. Performed to Marvin Gaye’s version of “I Heard it Through the Grapevine.” These balloons have popped many, many times, including at the 2012 Spanksgiving Burlesque Festival.

Mario Flower: The Super Mario Bros. Piranha Plant! With fireballs! My largest and most elaborate costume yet, set to the London Philharmonic Orchestra’s Mario Theme, and Pat Benatar’s “Hit Me With Your Best Shot.”

In Your Room: This act celebrates eroticism, fetish, and Depeche Mode.

The Big Lebowski: A tribute to the Dude. Complete with a bathrobe, bowling ball, bowling pin fans, the ringer suitcase, and a rug that ties the whole act together.  Performed to Kenny Rogers’ “I Just Dropped In (To See What Condition My Condition Was In).” This act has bowled over audiences on many stages across Austin and the 2013 Texas Burlesque Festival and the 2012 San Antonio Burlesque Festival.

Tribble Trouble: An outrageously silly ode to Star Trek. This tribble just can’t stop from popping! Set to a background of STOS sound clips and Britney Spear’s “Oops, I Did it Again!” This new act has been spotted at the 2016 Texas Burlesque Festival and 2016 Philadelphia Burlesque Festival.

Sinatra: A swanky suit and cane number.  Performed to Frank Sinatra’s “All I Need is the Girl.” Sinatra has been strutting stages for a while, sometimes with live music by The Copa Kings!

The Nutty Professor: A quirky Jerry Lewis inspired act with a chemistry set! Performed to a mix by composer Raymond Scott. This was one of my earliest acts and has been seen the most, including my debut at the 2012 Texas Burlesque Festival.

Artemis, the Huntress: A dramatic account of the Greek Goddess and her prey.  Performed to Florence and the Machine’s “Breath of Life.” This new a new act and has only been seen by one audience!

Jailbird Gemmi: A silly, high-energy shimmying, shaking, fury of fringe! Performed to Mike Patton’s version of the Italian “Che Notte!” This jailbird broke out in 2013 and has been performed many times since, including the 2013 Spanksgiving Burlesque Festival.

Christmas Present: A holiday act in wrapped in a big bow! Presents upon presents. To Last Christmas by WHAM!

Ligeia: A tribute to the short story by Edgar Allan Poe. Creepy and seductive, from beyond the grave.  Performed to Murder By Death’s “Comin’ Home.” Ligeia has haunted many shows in Austin.

Poison Ivy: A cosplay love story with lite bondage.  Performed to Fiona Apple’s “Criminal.” Poison Ivy has been tied up so many times, including San Japan 2013 and Realms Con 2014.

Grumpy Bear Go-Go: The grumpiest Care Bear gives in to the rhythm. Performed to a mix of Paint it Black by The Rolling Stones and Feel it Still by Portugal the Man.

Catalog of acts, with descriptions and live photos 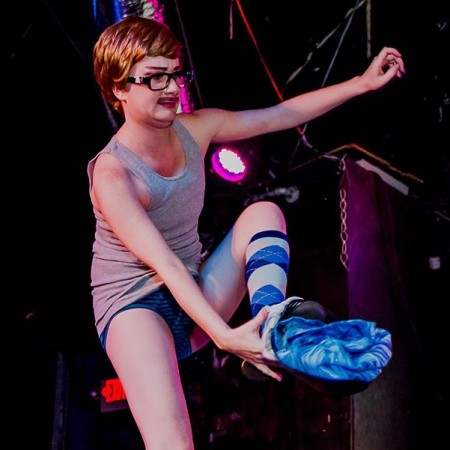 The drag king- catalog of acts, with descriptions and gallery